Kate Middleton who is now officially engaged to Prince William, as if we could escape the exciting news anywhere, has finally debuted her engagement ring. On Tuesday she wore the ring given from Prince Charles to Princess Diana, in 1981. We wrote a piece on the beautiful ring not to long ago, now it is being brought out again, on the hand of Kate Middleton. Here are some picture from an event at St. James Palace where she debuted the ring on her finger.

Now what if we want to get one for our very own? The prince maybe not, but the ring is definitely a possibility! Tacori has already released a beautiful look alike they named “Dantela” with 0.35 cts G, VS in diamonds and a beautiful three carat Sapphire center stone. 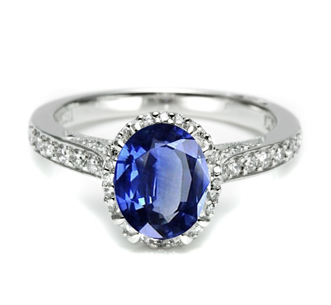