This elegant Tacori engagement ring setting # 2576 features channel-set princess cut diamonds along with pave-set diamonds on the sides of the band. 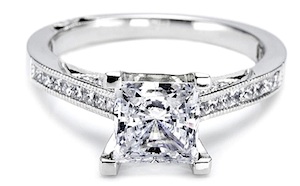 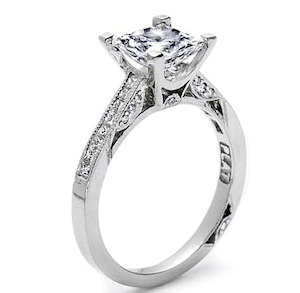 The football player married the reality star on July 4th.

I actually like Chad Ochocinco, he is charismatic, often retweets his fans, and replies a lot in Spanish since he is fluent. He’s more down to Earth than I ever thought he would be.

The couple showed off a picture of their wedding rings right after the wedding, Evelyn Lozada is seen with a stunning eternity ring that matches her engagement ring perfectly, while Ochocinco’s wedding band is thicker.

A lot of shimmer for a very flashy couple.

You know what else is kind of amazing about this wedding? Ochocinco was tweeted by a woman, Cheryl Minton, who had became a widow two weeks prior, she shared that July 4th would have been their 30th anniversary. What Ochocinco did next cemented him as one of the sweetest and most considerate celebs out there…he invited her to his wedding…all expenses paid.

Below: Ochocino with Cheryl Minton

The cute looking blonde was spotting walking with her step daughter  in Santa Monica, she also attended an event looking radiant in a fitted black dress. Congrats to the soon to be mom!

Adele is amazing, I can’t even imagine the lullabies this baby will hear! What a gorgeous voice! The singer announced through her website that she is expecting her first child with her boyfriend Simon Konecki.

“I’m delighted to announce that Simon and I are expecting our first child together. I wanted you to hear the news direct from me, obviously we’re over the moon and very excited but please respect our privacy at this precious time. Yours always, Adele xx.”

I guess the contract was up…5 years since the couple married they are heading for divorce. All I can imagine poor Katie Holmes thinking is: I’m free! I’m free!

Tom Cruise is crazy, no doubt about, I have no idea how she made it this long. A rep from each camp spoke out:

“This is a personal and private matter for Katie and her family. Katie’s primary concern remains, as it always has been, her daughter’s best interest.”

“Kate has filed for divorce and Tom is deeply saddened and is concentrating on his three children. Please allow them their privacy.”

I really hope she somehow writes a tell all book, though I highly doubt Crazy Cruise will let her, he probably had all that specified in the contract….

The perfect geeky and creative way to propose? Yup! Check out the short below, its adorable!

Tacori Engagement Ring 372PR is handcrafted in California, 0.73 carats of round stones are set along the band of this French cut style setting with a square shaped bloom adorning your choice of a princess-cut diamond at the center. A signature Tacori crescent adds the finishing touch on the band. 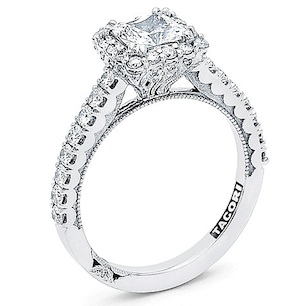 Diamonds are beautiful there is not doubt about it, and they symbolize so much, especially when its in the form of a ring. But by the time you get that stunning engagement ring, the diamond has been through a crazy extensive process!

I happen to really love the earthy look for jewelry and I am partial to stones, especially turquoise and lapis, but there is a real beauty about a raw diamond ring…

But a shiny shimmery ring…is never a bad thing either!

Check out this one below, I love how dainty it looks. Its a very different look and you have to be into it, but I think it can be quite stunning.

Romeo Miller grew up to be quite a good looking kid, and he seems pretty easy going, but has he found love? Miller was spotted with Angela Simmons, both of them are kids of famous rappers, so the bonding would be obvious, but it looks like it was more than that.

Last month the two were spotted on a series of what can only be described as…dates. Chilling having coffee, some laughing, innocent touching, but thats about it. Simmons’ ex is rapper Bow Wow.

Miller recently appeared on the Wendy Williams Show where she bluntly asked him if the two were dating, he said he was single…but right after when she pressed…he said “no comprendo” which is the go to answer when dodging questions. I have a feeling these two are very together. Check out the video of the interview:

Snooki may have stopped drinking and partying…but she has not given up her precious high heels…I still do not understand how these women can walk around pregnant, 9 months and just not be tired. I can barely wear heels now, let alone with an extra person attached to me! Literally!

Besides…after these photos were released doesn’t it make sense that she should just put on some comfy flat sandals? Why does she keep insisting? This also is not the first time she has slipped while pregnant.

A source spoke to People about the incident:

“She’s fine. She slipped. I don’t know if it was the shoe that was the issue or something on the sidewalk like a bump or something that she tripped over. Sad thing was that the paparazzi all kept snapping their photos and no one went to help her. That’s kind of sleazy. If you see any pregnant woman fall you should help them. She’s feeling good and she loves her footwear. Jessica Simpson wore heels almost to the end.”

I have to say…I agree completely with the paparazzi statement. They are vultures, how could you not help a pregnant woman out?